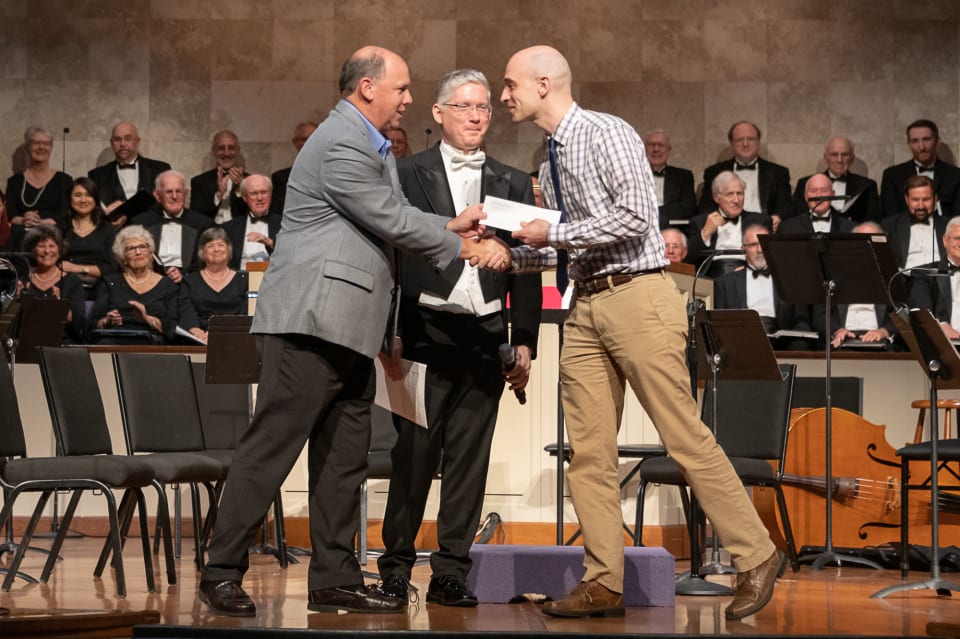 The final Fort Myers Symphonic Mastersingers concert of the season was held on Friday, April 5 at the First Presbyterian Church of Bonita Springs, where Dr. Zack Stanton was awarded the inaugural Sanibel Captiva Trust Company Prize in Choral Composition. Over 200 entries were submitted nationwide and Dr. Stanton’s work Before You Kissed Me (text by poet Sara Teasdale) was chosen as the winner by Artistic Director, Jeff Faux.

Presenting the award was Steve Greenstein, Executive Vice President of The Sanibel Captiva Trust Company, who also presented a $750 prize to Dr. Stanton. The Mastersingers then performed the composition to an audience of over 300 who also listened to presentations that evening by composers Vivaldi and Faure.

“We are proud to support the work of The Mastersingers, and their continued presence as a significant cultural force in our community,” said Greenstein. “This diverse ensemble of men and women share a singular passion for singing, as well as a commitment to performing choral masterworks and world premiere pieces.” On behalf of The Trust Company, Greenstein extended best wishes to Artistic Director Jeff Faux, who after nearly 10 years with the group, conducted his final performance that evening.